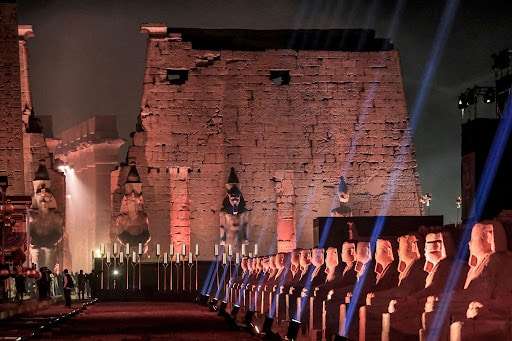 For the first time in 3000 years, the Sphinx Avenue (the Rams Road) returns to the light and sees the sun again.

The Sphinx Avenue (the Rams Road) is originally a royal avenue that connects the Karnak Temple in the north with the Luxor Temple in the south. It was established for the purpose of witnessing the annual celebrations of the Opet Festival, feasts and special occasions, as well as the coronation of kings, with processions that extended from the Karnak Temple to the Luxor Temple.

In the Pharaonic eras, around 1,300 sphinx statues are thought to have lined this avenue on both sides, but currently there are only about 300 of the original sphinxes. The rest of them had been destroyed in the eras that followed the Pharaonic era.

The ancient Egyptians called this road “Wat Nathr”, meaning the path of God. While the road of rams in the temples of Karnak, was known as “Ta-Mitt-Rahat”, translated as Al-Kebbash Road.

The road is divided into 3 main parts:

The first part starts from the tenth edifice of Karnak Temple and heads south for a distance of 300 meters until the gate of the Temple of Mut. This part of the road was built in the era of King Tutankhamun, and it is considered the oldest part of the road visible so far. Along the road, there are sphinxes with a lion’s body and a ram’s head, sitting on bases.

The second part of the road includes statues of whole rams in front of the Temple of Khonsu, one of the Karnak temples, which dates back to the era of Amenhotep III, who started the construction of the Luxor Temple. They were brought to this place during the reign of King Herihor, one of the kings of Dynasty 21.

The third part of the road extends from the Temple of Mut first towards the west or towards the Nile for a distance of about 200 meters and then deviates south at a distance of 2000 meters until it reaches the Luxor Temple. The statues in this part are smaller than in the previous two parts, and take the form of a lion’s body and a human head bearing the features of King Nectanebo I.

These statues were carved from a single block of sandstone with a cornice inscribed with the name of the king, his titles and praise for him, placed on a stone base consisting of 4 courses of stone bearing some inscriptions.

However the problem is that most of this road was buried under the ground, and not just like that, but on this archaeological path, houses, residences, mosques, churches and even government buildings were built in the area known as “Naga Abu Asba”.

In order to revive the old road, it was necessary to remove all these encroachments, which requires a real political will because the cost of expropriating all of these properties, compensating their owners and providing them with alternative places is very high. This is in addition to the technical difficulty in discovering and restoring the ancient archaeological road, as well as restoring the rams that were discovered, most of which were in a deplorable condition.

Because of all these reasons, the project to revive the “Road of Rams” was just a dream that is difficult to achieve, until about two years ago, when the state decided to take on this great challenge and provide it with all material and technical capabilities, and the features of the ancient archaeological road began to become clear little by little, until the road came to light again. In parallel, the archaeological rams were restored by the Egyptian restorers, amounting to 48 rams, some of which were neglected and broken, and some were brought from other governorates.

At the same time, Karnak Temple was restored to remove the dirt and erosion factors that occurred to it over hundreds of years. Also, the original colors of the archaeological inscriptions engraved on its huge columns were restored.

The completion of the restoration work was officially announced several days ago, and the date for the opening of the Rams Road was set for Thursday, November 25, 2021.

The celebration will be a majestic global legendary ceremony similar to the procession of the royal mummies, which will start from the Karnak temple, through the road of rams and up to the Luxor Temple, where the main platform and the place for senior visitors includes leaders of countries and public figures.

The parade includes a number of Pharaonic chariot, war wheels and more than 400 young men and girls, who are dressed in Pharaonic clothes.

This majestic Pharaonic procession will be accompanied by the playing of the famous “Amun hymn”. The ceremony will be attended by international and local political leaders, and will be covered by all Egyptian, Arab and foreign news agencies.

The celebration will also include a display of the flying balloon, which will be photographed by drones, and a number of Nile boats carrying some decorated banners, which will display some joyful performances in the water so that many people, attendees and passers-by can watch them along this road along the Nile Corniche in Luxor.

In addition to all of the above, the ceremony will include the establishment of a large theater on the sacred lake inside the Karnak Temple to perform some performances.